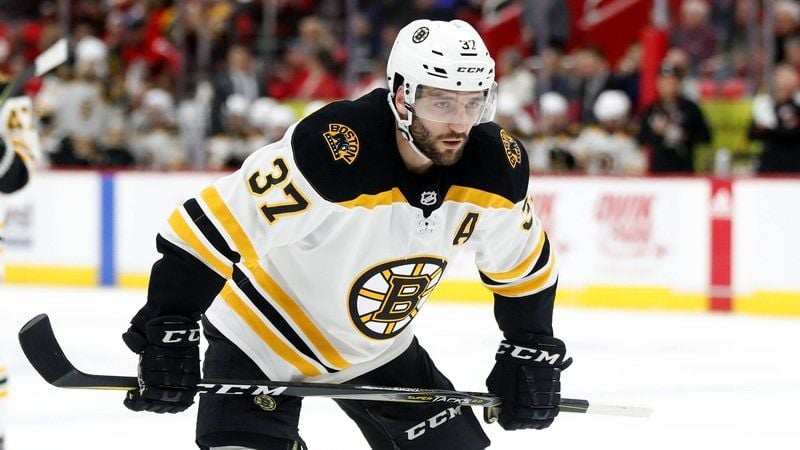 You’d have to live under a rock in the hockey world not to know of “the Ovechkin Spot.” It has become his signature play, setting up at the top of the left circle and bombing one-timers in lightning-like fashion. You may, however, be surprised to know that Patrice Bergeron has his own signature play in the offensive zone.

Regardless of who is passing him the puck, Bergeron is excellent at getting lost in coverage, then finding a dead zone within the right circle for a quick-release one-timer. What am I talking about? Check out the play below.

Marchand and Bergeron have been playing together for so long that this play is second nature to both. Watch in particular how Bergeron identifies the open area between four Leafs defenders, all of whom are focused on Marchand. He doesn’t set up for the one-timer until AFTER Marchand has started the process of passing the puck, and is in the right position, at the right time, in order to let the shot go.

Bergeron has also made a home for himself in the bumper position on the power-play, and has free reign to move around as he sees fit, as such:

Watch in particular how he stays close to the penalty killing forward until Pastrnak starts looking to make a pass. As soon as he identifies that Pastrnak needs an option, he takes one hard stride that instantly puts him into that dead space between all four defenders, and the puck is on and off his stick in less than a second. Once again, he doesn’t get set until after Pastrnak has released the puck.

This time, the Bruins are on a 5-on-3. They do a good job of moving the puck around the perimeter quickly, and Bergeron has set himself up much lower in the slot than on the 5-on-4. This puts him flush with two of the three defenders until he sees an opening. As the puck gets moved from high to low, the penalty killers all shift their focus to Brad Marchand below the circle. As their eyes move towards the bottom of the zone, Bergeron moves against the grain, giving him just enough open space to be a viable passing option for Marchand. The defenseman is less than two inches from getting a stick on that shot, but Bergeron is able to get enough velocity and accuracy on the shot, despite shooting off of his back foot (and on one leg for that matter) to beat Cory Schneider.

He does this at 5-on-5 just as often. Watch Marchand lose the defender with a sharp curl towards the boards, giving himself about a second or two of separation.

Bergeron, who has moved with the play and is heading towards the net, pulls up and suddenly shifts backward. He is moving towards Jeff Skinner but has timed it perfectly so that his shot is not interrupted. Once again, his release is pinpoint, and lightning-quick. He is able to do this because he recognizes the Carolina centerman has drifted a touch too deep into the zone, likely puck-watching a little bit, allowing Bergeron to find the necessary separation.

This one is just brilliant. On the power-play again, but look at where the defender is as Bergeron releases the shot.

He has sat directly next to Brooks Orpik while the puck is up high in the zone. As soon as Danton Heinen moves it down low to Marchand, Orpik moves to pressure him below the circle. As soon as he does so, Bergeron literally takes a step to the right, and, despite Alex Chiasson being in good position and recognizing what is about to happen, gets the shot off. The key here is how he has altered his release point. Instead of winding up for a full one-timer, Bergeron significantly shortens up his windup, only raising his stick to his knees. This gets the shot off much quick (and more accurately), but with a little less power. In this case, he does this in the timespan of about 3 seconds. Brilliance.

So, yes. While Patrice Bergeron is a perennial Selke Trophy candidate and has a legitimate argument for being the greatest defensive forward in the history of the NHL (certainly of this generation), he has become a true two-way force. Hopefully, other teams don’t see this though, I don’t want them getting clued into the gameplan for Bergeron to hit 30 goals again this year.

**All GIFs were created by the author, utilizing GIPHY.com, and a YouTube video from YouTube user Hatrickane. Please be sure to check out his other compilations, and like/subscribe to his channel!